Rec. (Pro) provides many advantages over the standard adb screenrecord utility. Some of the highlights include:
▪ No need to be tied to your computer while recording.
▪ Longer screen recording with Audio – record for up to 1 hour.
▪ Audio recording via the mic.
▪ A beautiful user interface – no more messing with the command line/terminal.
▪ Save your favourite configurations as Presets.
▪ Automatically show screen touches for the duration of your recording.
▪ Customisable countdown timer so that you can get your screen recording set-up perfectly.
▪ Shake your device, or simply switch your screen off, to stop your recording early.

FAQs:
* Why can’t I install Rec. on my device?
Your phone/tablet must be running Android 4.4 Kit Kat or higher. You also need a rooted device for Rec. to function correctly/at all.
* Can Rec. record audio?
Yes! Audio is recorded via the mic.
Rec. Pro users can record video + audio for up to 1 hour, whereas Rec (free) users can try out recording with audio for 30 seconds in order to test whether it works properly on their device before purchasing the upgrade.
* Why is the recording laggy and slow on my Samsung Galaxy S2/S3/Note/…?
This seems to be an issue with Exynos-based devices not playing nicely with the native screenrecord function, so there’s not a lot I can do about it right now (I also don’t have access to any Samsung devices). Sorry!
* Does Rec. work with Intel x86 based devices?
I have no idea! Unfortunately, I don’t have access to any x86 devices running Android 4.4+, but if you try it, please let me know how you get on.

Disclaimer:
Tested on a Nexus 5/7, running stock rooted 4.4 Kit Kat, but it has been reported to work fine on other ROMs and devices also.
Unfortunately, I do not have the time or resources to test any other device/ROM combinations, so your mileage may vary.

ROOT REQUIRED
Rec. requires your device to be running Android 4.4 Kit Kat, and also be rooted, in order to do its magic.
Please read the FAQs below for important information about compatibility with Samsung Exynos devices. 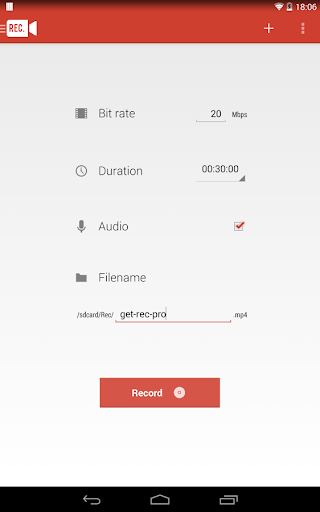 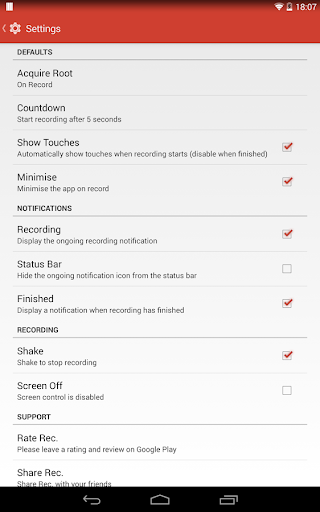 What’s New
v1.4:
▪ Audio recording via the mic.!
▪ Deprecated ‘Rotate’ option – there is now very basic support for rotation but I would still suggest sticking to one orientation