Adventure To Fate : A Quest To The Core JRPG v1.1 for iPhone/iPad

– The Story Behind A Quest To The Core –
Strange tidings have come to light in recent days, dark tales come from deep within the kingdom of Cardell. Early tales of bodiless voices and whispers reached the kings ears. Voices heard by many throughout the kingdom during the darkest of nights. Voices calling out, calling out and drawing them in…

On a dark cold night two of the kings finest knights disappeared. Many believed they fled the kingdom out of cowardice. Not all in the kingdom believed this to be true. Countless disappearances associated with the bodiless voices continued fortnight after fortnight. Castle Cardell became a prison to all who lived within its walls, lords and ladies, princes and princesses were forbidden to leave their quarters after dusk. The disappearances stopped and the tales died down until one cloudy morn when the king was missing from his bed…

Knights wondered how their king could have been taken? Mothers feared for their childrens lives and men slept with one eye open and a knife at their side. The kingdom was isolated to all outsiders. Some wondered if the king simply descended into the dungeons alone looking for the source of evil. Others believed that evil had gained body and come for the king.

Ravens were sent far and wide pleading for help. The greatest heroes of our realm responded with urgency wishing to assist in the quest for the king. The realm thanks you for your haste and pray to the gods for your safety in this matter. This will not be a simple journey and you can not be sure to come out of it with your life. I do not know what creatures and men you will find hidden deep below the floors, legend foretells that they are not from this world. May the gods keep you safe on this quest to the core.

– Explore The Dungeon –
4 Large Themed Zones (Classic Dungeon, Desert, Jungle, Undead)
Each has its own encampment town which includes shops, libraries, portals and much more!
27 Floors containing over 700 rooms to explore full of Bosses, Traps, Portals, Puzzles and Mystery

– Other Features –
Indie created game built for the people!
NO IAP!!! Once you buy the game it is yours and always will be!!!
Over 30 hours of game play between all classes!
Autosave feature – Easy to pick up and play at any time!
Unlimited character slots so you can try every combination possible.
Retro Pixel Art
8Bit sound/music
Library system that explains general game, character, skills and combat systems. 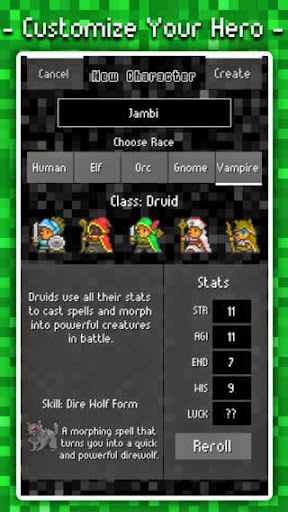 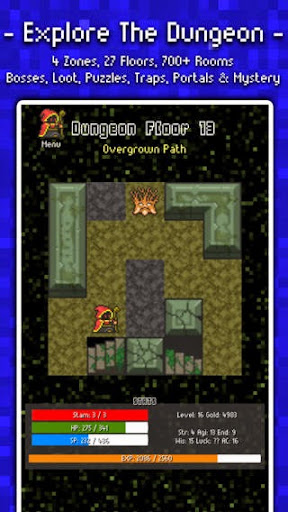 What’s New in Version 1.1
***New Features***
-Added more types of monsters, item drops and rooms to the first 3-4 floors. (For better initial experience)
-Added swap item ability. (You can now swap items instead of having to unequip and equip)
-Added options to turn music and sfx on/off on starting screen and character menu. (You can now play your own music)
-Added easier to read item info. (Items now only show the bonus stats with values > 0)
-Changed how prompts are displayed for battle, not enough resources and death. (Each is set on a 1 second timer instead of having to tap ok to continue).
-Added randomization to character creation. (human knight is no longer default selection)
-Added more movement to character attacks.
-Sped up npc attack speed 10%.
-Added direct support email to about page.
-Added direct game rating link inside about page.

***Bug Fixes***
-Fixed various spelling/grammar mistakes.
-Fixed the mislinked rooms on floors 13 & 21. (were trapping players)
-Fixed players getting stuck in walls after death or portaling then quitting game.
Fixed saving location after death
Fixed saving location after warps
Added ability to warp if you are stuck.
-Fixed unequip all skills bug. (when you removed them all you could not equip any)